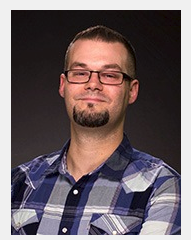 For Autism Awareness Month, the Empowered Parents Network is featuring stories from DISH employees who have been touched by Autism. We thank the participants for sharing their stories with us. Our first story comes from Sean Baker, Business Operations Analyst II for the DISH Beta Group.

When I was little, I was always told that I had a “temper”. My parents took me to a therapist a time or two, and each time it was about some anger management scenario. “Watch your temper,” I’d hear. “Calm down, don’t be so angry,” I’d be told. The thing that drove me nuts about this was that I never actually felt angry. Being told that I was bothered me.

Nonetheless, I did get frustrated, panicked and confused at what seemed to be tiny things. This always got interpreted as anger. It continued into adulthood. What puts me in these situations and how it feels has always been very difficult for me to identify
or explain. As best I can put it, it’s more like chaos. I get overwhelmed with options and contingencies running through my mind, to the point where sometimes I literally freeze up trying to determine whether to turn left, or right. My body language says ‘angry’, but that isn’t what I feel.

It was just me being an oddball, I’ve always thought. I have some degree of anxiety, am introverted and prefer delving into hobbies than socializing. That’s just who I am. And that’s been okay, as far as rationalizations go. But that started to change when my ‘quirks’ proved to be challenges in a workplace. Some jobs it was less of an
issue, but others, like my time as a chef in high-paced kitchens, was notably worse. I’ve been hopping from one career field to another all my life, trying to find a fit.

In 2015 I joined Dish’s Tech Ops department as an analyst in the Beta Group. It wasn’t long before my quirks surfaced and presented the usual speedbumps. This time it scared me more than ever because of how excited I was for the job. But this time, I had an unknown advantage. My manager, Tiph White, happened to be an ASD mom. Where others had seen problems, she saw something familiar.

“Have you ever considered you might be on the spectrum?” she asked me once. At first, I shrugged it off thinking it was a bit out of left field. But after reading into it a little, I was shocked to find a lot of very familiar things. On a routine doctor visit I asked to include a mental health professional to look into it. I was told that I did
indeed fit the characteristics of High Functioning Autism. This opened a lot of doors as to how to manage things, and the results have been, simply put, lifechanging.

I’d found the missing puzzle piece (reference intended) that had eluded me all my life, thanks to an ASD mom. I’ve since learned simple things that have helped me in my work and personal life.
The list goes on and on, but today I’m able to manage and function in a professional environment on a level I would never have imagined possible not long ago.

The important lesson here is to be open to mental health options. Make no assumptions and explore what feels troubling or ‘wrong’ with you. There might not be anything wrong at all. You might just be different. And different is not only okay – it’s exciting.